Conference: Perspectives on the Technical Dialogue Agreements between Kosovo and Serbia 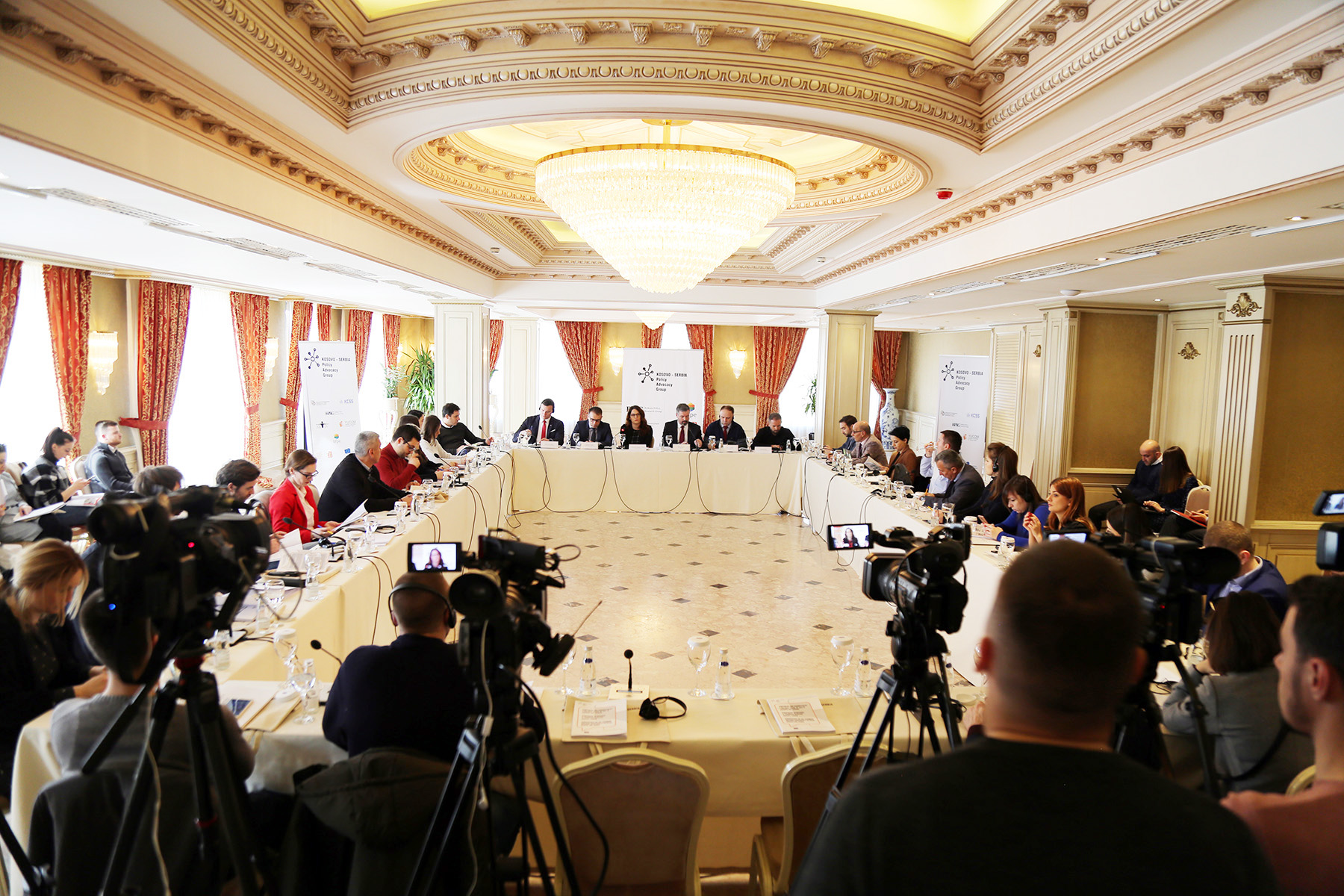 21 February 2020 – Kosovo-Serbia Policy Advocacy Group (KSPAG) organized the “Perspectives on the Technical Dialogue Agreements between Kosovo and Serbia” roundtable discussion in Prishtina/Pristina. The roundtable launched the publication of a booklet containing Op-Eds written by citizens and professionals from Kosovo and Serbia who brought their personal views and experiences on the positive results of a number of technical dialogue agreements.

The roundtable panel consisted of Op – Ed authors, CSO activists and journalists who discussed the impact of the technical dialogue agreements on the daily lives of the citizens in Kosovo and Serbia.

In his opening remarks, Mr. Naim Rashiti, Executive Director of Balkans Policy Research Group (BPRG), provided an overview of the project implemented by the KSPAG and highlighted the challenges that the consortium had in engaging authors to write on the benefits of the technical dialogue due to the political discourse and the overall atmosphere around the dialogue. “But luckily we managed to work with 17 authors from Kosovo and Serbia, and we are very thankful to them for writing on their experiences and knowledge on the technical agreements, presenting the specific benefits that citizens had from them” concluded Mr. Rashiti.

Mrs. Florentina Hajdari – Hajra, author of an KSPAG Op-ED and a civil society activist, argued that the agreements reached during the technical dialogue have provided benefits for citizens despite many challenges of the process and the lack of the transparency. She explained that writing an article was an opportunity to provide her own experience of the benefits and insight on the technical dialogue.

On the other hand, Mr. Gazmir Raci, former member of the Kosovo negotiation team, highlighted the telecommunication agreement as one of the most important one of the technical dialogue listing a number of benefits brought by it. Mr. Raci also named a number of other agreements that have been of importance to both parties, such as the IBM agreement.

Mr. Naim Leo Besiri, from the Institute for European Affairs, noted that “in Serbia the Kosovo-Serbia relations are seen as a security issue. Since 2012 this was an extremely challenging area to be in and it would bring you in to a difficult situation, if not hostile to be talking about this matter.” Yet, he concluded that the major impact of the dialogue was that it addressed the legal vacuum that existed for more than 20 years.

Mr. Željko Tvrdišić, a journalist from North Mitrovica, stated that the main objective of the technical dialogue was to improve the life of the citizens, and in his opinion the technical agreements have managed to achieve that. He mentioned two agreements as having the biggest impact on citizens’ lives –  that of the freedom of movement and the other one on the judiciary integration in the north of Kosovo. “Although the agreements can be interpreted differently, as a citizen of a municipality with a majority Serbian community, I see many positive impacts and I expect these to become greater” concluded Mr. Tvrdišić.

Mr. Shpetim Gashi, from the Council for Inclusive Governance indicated that “the Brussels Dialogue has initiated a transitional period in the relationship between Kosovo and Serbia. It is the first dialogue where these two parties have come to various agreements such as the integration of the north of Kosovo, IBM, the integration of the police, freedom of movement. And all these agreements have been of high relevance for both parties”.

Aside from the panellists, participants provided their input in the discussion about the benefits of the technical dialogue and voiced their concerns about the lack of transparency in the dialogue process.